One fine evening in New York, renowned artist Pablo Picasso’s painting sold for a world record $106,482,500. The year was 2010 and the painting called ‘Nude, Green Leaves and Bust’ became the most expensive Picasso painting ever sold. It even broke the previous world record for any art sold at an auction. Fast forward to 2022. The painting now hangs in the Tate Modern, United Kingdom, generously lent by its anonymous owner. But what is so special about this painting? Other than the fact that it was painted by the master of Cubism, is the art really worth its selling price?

The Mistress and the Muse

Nude, Green Leaves and Bust (French: Nu au Plateau de Sculpteur) was painted by Picasso in 1932. Known for his torrid affairs and sexual dominance, Picasso liked having muses that inspired him to paint throughout his life. This painting in question is of his mistress Marie-Thérèse Walter. He first met Marie in January 1927 when she was seventeen years old. Picasso, a middle aged married man, fell in love with her when he saw her outside the Metro and proposed that he paint her portrait. Shortly after, their intense love affair began and Pablo kept her a secret for 8 years — even from some of his closest friends. He slowly became obsessed with her features and the voluptuous curves of her body, which led him to create a series of paintings and sculptures of his lover starting 1931.

Marie-Thérèse helped free Picasso from painting analytical forms of Cubism and Surrealism. His artwork was now more sensual, energetic. This transformation of art was solely based on the wild nature of their affair. Marie-Thérèse revealed once that Picasso “psychologically and sexually dominated her” yet she as happy to play the submissive role saying “a woman doesn’t resist Picasso”. The torrid affair continued until 1935, when Picasso’s wife Olga, who was known to be a very possessive woman, found out about his mistress. Olga decided to get separated from Picasso which led to the artist living with his mistress and their daughter Maya. It is said Picasso was not impressed by Marie-Thérèse’s lack of intellectual curiosity and knowledge and hence started a new affair with Dora Maar, who would soon become his new muse. Picasso did however continue painting Marie-Thérèse till the 1940s and provided financial support. Four years after his death, Marie-Thérèse died by suicide and remained faithful to her lover till her last breath. 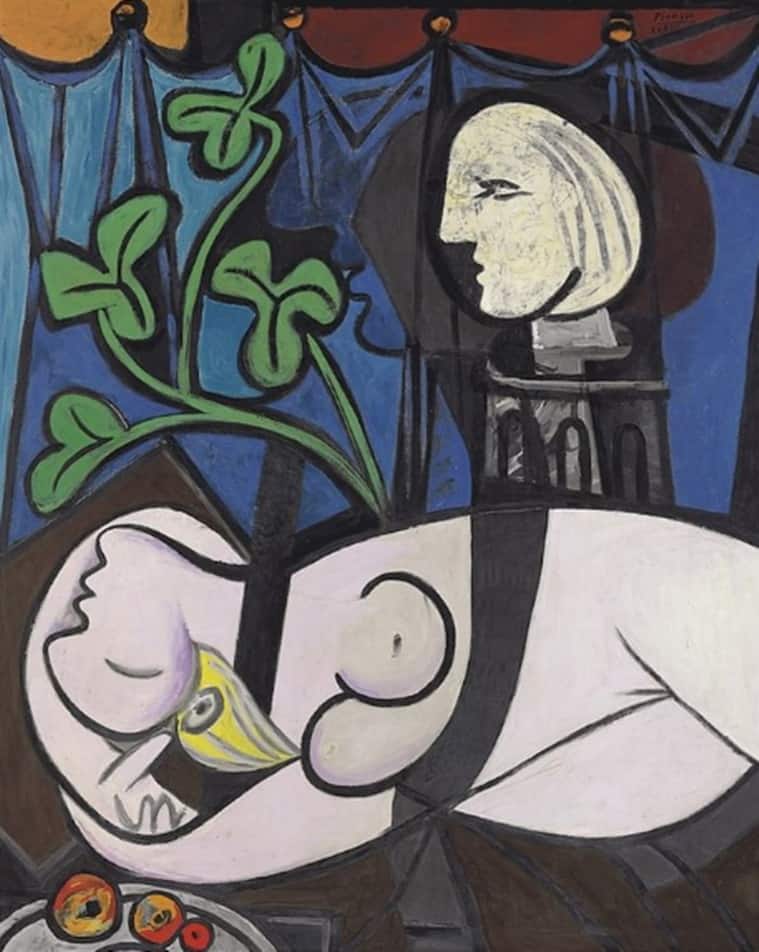 Nude, Green Leaves and Bust has artistic charms that make the viewer question the story behind it. (Photo: Instagram/@the_red_list)

The sensuous and submissive painting

Nude, Green Leaves and Bust not only captures the nature of the love affair Picasso had with his muse Marie-Thérèse, but also looks at the subject of female submissiveness. It is undoubtedly one of the most sensuous paintings out of his collection of large nudes. The painting showcases Marie-Thérèse’s body with a philodendron plant coming out of her — a symbol of fertility. Picasso took his inspiration from classical mythology. He used the philodendron leaves in a sculpture called Woman in the Garden of 1929. The sculpture showed Marie-Thérèse as the nymph Daphne being metamorphosed into a bush. The same imagery has been used in the painting Nude, Green Leaves and Bust.

The vibrant blue and lilac canvas attracts the attention of the viewer quite easily. However, it is the sculpted head that is overlooking his muse that gives it the modern art twist. There is a curtain against which the bust is casting a double shadow. The shadow makes it seem like the bust is trying to grab a hold of the woman lying in the bed. If one looks closely, shadows form a double P on the body of Marie-Thérèse. The Ps are embracing her body and could most likely stand for Pablo Picasso — as if he owns her body and is putting a stamp on it. Picasso has successfully captured so many elements in one simplistic painting that leaves the viewer with wonder.

While it is true that Nude, Green Leaves and Bust holds more value in the world of art due to its selling price, it does have artistic charms that make the viewer question the story behind it. The painting, in fact, started to garner more interest ever since it broke the auction record in 2010. It holds many layers of Picasso’s obsessive love for Marie-Thérèse and his habit of capturing the soul of his lovers on his canvases. From the imagery to the colour palette, it intrigues art lovers around the world. Although the painting does not make it to the top 10 list of most famous paintings in the world and many argue it is not one of the best works of Picasso, it does hold its own value as a symbol of sensuality and passion.

Next Up in Behind The Art: Why is Edvard Munch’s The Scream considered as an icon of modern art? What is the real story behind it?