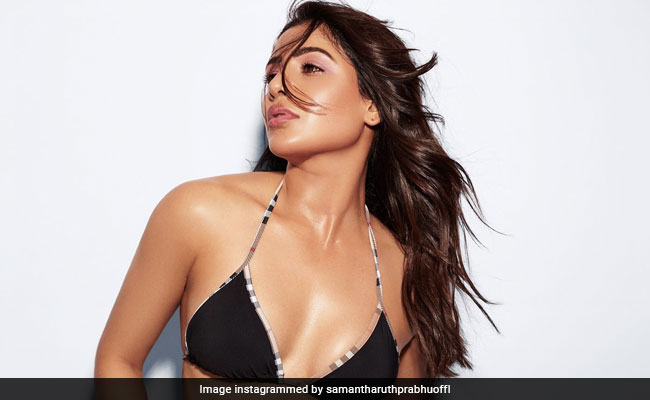 Samantha Ruth Prabhu is one of the most loved actresses in India today thanks to her tremendous body of work. The superstar is a favourite among fans as well as her co-stars, who she often interacts with on social media. We saw an example of this on Monday, when the actress shared a sultry picture of herself in a Burberry swimsuit and printed pants, showing off her toned physique. Sharing the photo, Samantha kept the caption wordless with just a heart emoji and tagged the British luxury fashion house. But fans of the actress were more than happy to shower her with compliments for the stunning picture.

Actress Anushka Sharma reacted to the post by saying, “Hottie,” with fire emojis. Lakshmi Manchu followed suit with the comment, “Someone get the fire extinguisher. Uff.” On the same lines, Kannada actress Samyuktha Hegde also said, “Someone please call the fire brigade.”

Samantha Ruth Prabhu followed up this gorgeous image with another set of fashion pictures on Tuesday. In them, the star is dressed in a red top and pink pants, looking gorgeous as always. In the caption, Samantha said, “T’was some day.”

When Samantha Ruth Prabhu is not immersed in work, she can be spotted chilling with her close circle of friends. A few days ago, the actress shared two images of herself goofing around with her makeup artist, Sadhna Singh. In the caption, Samantha said, “We had a super busy day…Made it from the couch to the bed.”

The self-confessed fitness enthusiast also often shares pictures and videos from her workout sessions. Recently, Samantha Ruth Prabhu shared a photo of herself at the gym but she was not alone. In the image, she is seen with her pet dog. In the caption, she wrote, “Early rising and loving. Missed this.”

On the work front, Samantha Ruth Prabhu will be seen in a bunch of exciting upcoming projects such as Shaakuntalam, VD11 and Yashoda, among others.

When The Sun Made Anushka Sharma “Shy” On Her Beach Vacation

Anushka Sharma Clicks Her “Own Photos” As She Enjoys On The Beach. See Pics

When The Sun Made Anushka Sharma “Shy” On Her Beach Vacation

Anushka Sharma Clicks Her “Own Photos” As She Enjoys On The Beach. See Pics