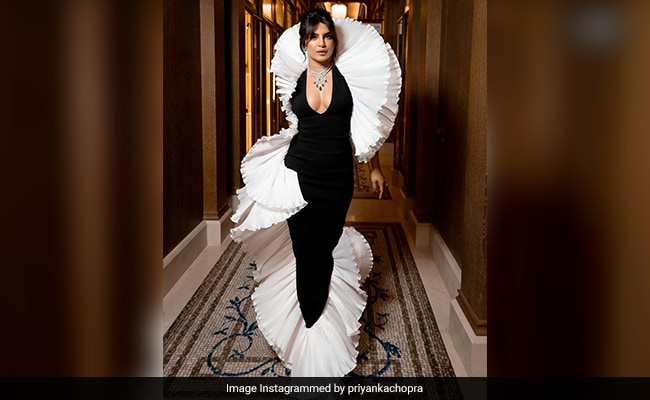 Priyanka Chopra surely knows how to make a statement. The actress, who is in Paris for luxury brand Bulgari’s event, shared photos of her new look and stunning can’t even begin to describe it. She wore a “contrast dove gown” from the shelves of Robert Wun for the occasion. Her accessory, obviously, was by the jewelry luxury brand that she was representing. She had her hair tied up and kept her make-up minimal, with contoured cheeks, light lip colour and winged-eyeliner. “It’s never just black and white…,” she captioned the post.

In the comments section, Vidya Balan wrote: “Stunning.” Priyanka Chopra’s cousin Parineeti added, “Soo stunning mimi di.” The actress’ fans filled up the comment section with a series of fire and heart emojis. Why are we not surprised at all?

The clothing brand Robert Wun shared some stunning shots of the actress in the haute creation. See the photos here:

For those who missed Priyanka Chopra’s first look from the Bulgari event, she picked a golden outfit and was every bit stunning. She shared a reel from all the moments and she captioned it: “Revasser.”

At the Bulgari event, Priyanka Chopra clicked a selfie with Anne Hathaway and she captioned it: “And then there was us.. girls just wanna have fun.” Talk about too many stars in a frame.

Priyanka Chopra’s next project Citadel, is a multi-series with productions from India, Italy and Mexico and it also stars Richard Madden and it will be directed by the Russo Brothers. Citadel is Priyanka Chopra’s second project with Amazon Prime Video after announcing the Sangeet Project, a sangeet-themed dance reality show, which she will host with Nick Jonas. Last year, Priyanka Chopra was seen in Netflix’s The White Tiger, based on Aravind Adiga’s Booker Prize winning novel. She was last seen in Matrix 4.

Priyanka Chopra, a former Miss World and a Bollywood star, is a woman of many hats. She is the first South Asian woman to headline the cast of an American television show and has featured in many Hollywood projects. Priyanka Chopra is a tech-investor and also counts as a UNICEF Goodwill Ambassador. She also opened an Indian restaurant called Sona in New York and runs a haircare brand as well.

Personal Information of over 1 million students, staff allegedly on sale for just 250 dollars

Encounter breaks out in Budgam village

Personal Information of over 1 million students, staff allegedly on sale for just 250 dollars

Encounter breaks out in Budgam village