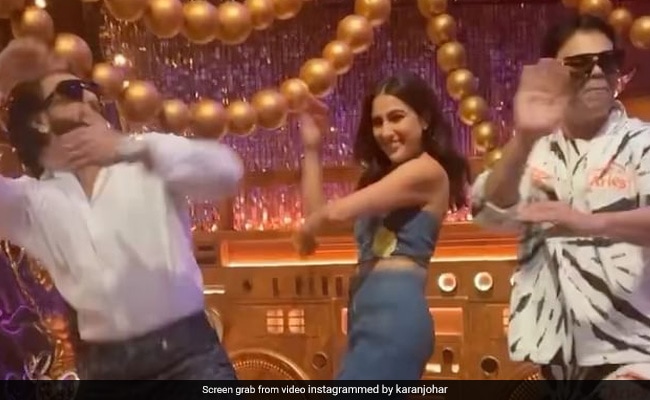 Sara, Ranveer and KJo in a still from the video. (courtesy saraalikhan95)

Bollywood stars have bombarded Instagram with fun dance videos, in which they can be seen dancing to the track The Punjabban Song from the film Jug Jugg Jeeyo. From Janhvi Kapoor to Tamannaah Bhatia to Vicky Kaushal, everyone has shared videos of themselves dancing to the popular track. The latest additions to the list are Sara Ali Khan, Ranveer Singh and the film’s producer Karan Johar. Sara and Ranveer co-starred in Simmba, while Ranveer Singh will work with KJo in Rocky Aur Rani Ki Prem Kahani, co-starring Alia Bhatt. Posting the video, Karan Johar wrote in his caption: “Joining the Punjabban party. ” Varun Dhawan, who features in the original song, commented:”Sara ka sara pyaaar.” Sara’s aunt Saba Ali Khan wrote: “Super.”

Check out the video posted by Sara Ali Khan here:

Sara, who made her Bollywood debut in 2018, has featured in films such as Kedarnath (her debut film), opposite late actor Sushant Singh Rajput, Love Aaj Kal with Kartik Aaryan and Coolie No 1 remake, co-starring Varun Dhawan. Sara was last seen in Atrangi Re, co-starring Akshay Kumar and Dhanush.

Ranveer Singh was last seen in Yash Raj Films’ Jayeshbhai Jordaar. Before that he featured in Kabir Khan’s ’83. Last year, the actor also had a cameo appearance in Rohit Shetty’s cop drama Sooryavanshi, starring Akshay Kumar in the lead role. The actor also signed another project with Rohit Shetty, which is titled Cirkus. The film is an adaptation of Shakespeare’s The Comedy Of Errors.

Jug Jugg Jeeyo will have a theatrical release. It is slated to hot the screens on June 24. It has been directed by Raj Mehta, and produced by Karan Johar’s Dharma Productions. The film stars Neetu Kapoor, Anil Kapoor, Varun Dhawan and Kiara Advani.

Radhika Merchant’s Arangetram was a starry affair; know what the ceremony is all about

Radhika Merchant’s Arangetram was a starry affair; know what the ceremony is all about