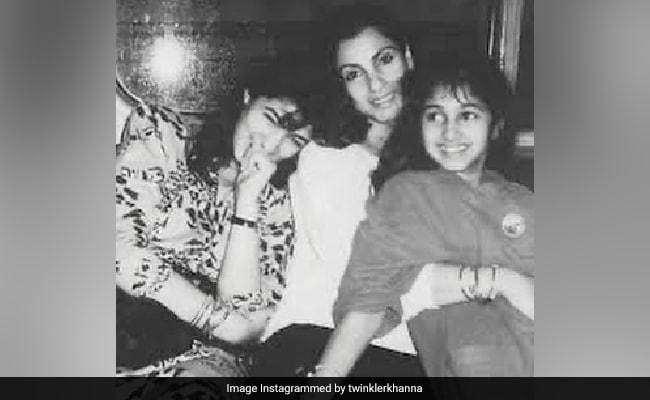 Dimple Kapadia turns a year older today and fans of the veteran actress have been flooding social media with wishes and messages. On the special day, her daughter, author-entrepreneur Twinkle Khanna also took the opportunity to wish her mother. And to do so, she shared a beautiful throwback image in which a teenage Twinkle is seen along with her mother and younger sister Rinke Khanna. In the caption, Twinkle has the sweetest thing to say about her mother. She wrote, “The birthday girl’s heart is even more beautiful than her face. Happy birthday, mom! Replying to the post, Namrata Shirodkar said, “Happy happy birthday to the most beautiful woman I know.” Director Tahira Kashyap replied with a heart emoji.

Twinkle Khanna and mom Dimple Kapadia share a warm camaraderie that is evident in the several social media posts shared by the doting daughter.

A few weeks ago, Twinkle Khanna shared a video of her mother and her daughter, Nitara Kumar walking with each other, with their backs facing the camera. The grandmother and granddaughter seem to be engrossed in deep conversation, unaware of Twinkle’s camerawork. In the caption, Twinkle said, “The two most important women in my life are walking together with an ease that I envy.”

Speaking about their bond, Twinkle Khanna added, “With grandmothers and granddaughters, the generational gap is wide enough so that both can stretch out their arms without smacking the other in the face. Nanis are simply the best though, aren’t they?”

Before that Twinkle Khanna shared another throwback image of Dimple Kapadia with her and Rinke Khanna. In the caption, Twinkle compares her pose with that of the famed sculpture, The Thinker. In the caption, she said, “Who strikes the pose better? My answer: Rodin’s The Thinker, but I was way cuter. You can throw in your vote as well.”

Twinkle Khanna further added, “P.S Let me clarify since even my friends are messaging me – the pose competition is not between the three of us. It’s us versus Rodin’s thinker. Jesus.”

On the work front, Dimple Kapadia was last seen in the 2022 film A Thursday. Before that, she played an important role in the 2020 Christopher Nolan film Tenet. Meanwhile, Twinkle Khanna is known for her best-selling books such as Mrs Funnybones, Legend of Lakshmi Prasad and Pyjamas Are Forgiving. She is married to actor Akshay Kumar.

Looking for ways to style your bookshelf? Here’s how Twinkle Khanna does it

Women’s Day 2022: Kajol, Twinkle Khanna And Others Share Pics With Their All-Women Teams

Looking for ways to style your bookshelf? Here’s how Twinkle Khanna does it

Women’s Day 2022: Kajol, Twinkle Khanna And Others Share Pics With Their All-Women Teams