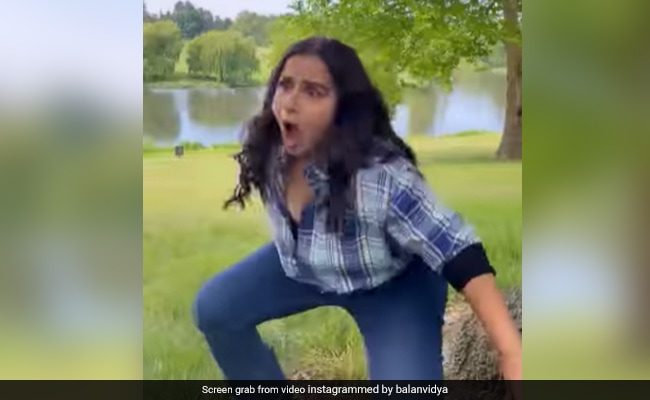 Vidya Balan in a still from the video. (courtesy balanvidya)

Vidya Balan is an actress par excellence. Her craft is visible in each of her versatile roles that make for an impressive repertoire of work. Even the actress’ social media handle is a testament to the skills of the entertainer. Whether it is trying out a trending Reels or mouthing a viral dialogue, Vidya does it all with ease. On Tuesday, the actress shared yet another video that has the internet in splits. In it, Vidya is seen performing to an audio track and attempts to sit down under a tree in a sultry manner. While she getting up, on audio cue she acts as if she has hurt her back. In the caption, she wrote, “Every trend is not for you.”

In the clip, Vidya Balan is dressed in a shirt, crop top and a pair of jeans. Replying to the hilarious video, Dia Mirza dropped heart and laughing emojis. Ileana D’Cruz, who will soon be seen with Vidya Balan in an upcoming (untitled) film, said, “Bahaha, you hilarious but we all know that you can totally smash any trend.”

Recently, Vidya Balan also impressed her Instagram followers when she channelled her inner Alexis Rose from the popular sitcom Schitt’s Creek in a video. In the hilarious post, the actress is seen lip-syncing to one of Alexis’ most famous dialogues, “Ew, David.” But what prompted this reaction from the star? Well, she explains that in the caption: “When someone says they enjoy green tea more than desi chai.”

Three days ago, Vidya Balan also had fun with some filters on Instagram. She recorded a video in which she is seen using a filter with exaggerated eye makeup. In the clip, fans can hear the audio: “You always have that strong eye makeup. Is that you or do you have a makeup artist who does that for you?” To this, Vidya pouts and lip-syncs, “I actually did it myself.”  In the caption, she said, “When your makeup artist is not around.” Fans of the actress flooded the comments section with laughing emojis.

Vidya Balan will soon be seen in Neeyat and another untitled film directed by Shirsha Guha Thakurta. She was last seen in Jalsa alongside Shefali Shah.