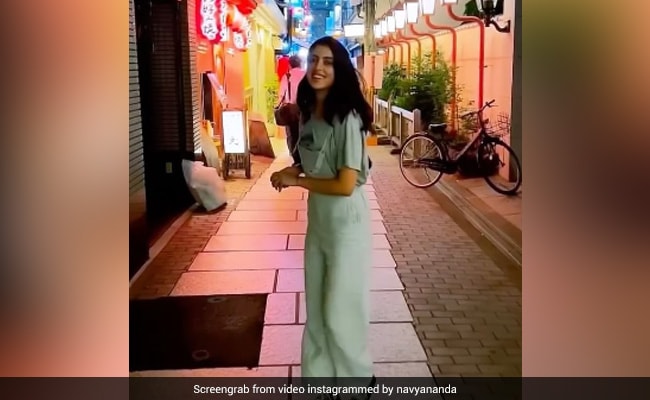 Navya Nanda in a still from the video. (courtesy: navyananda)

Another day, another page from Navya Naveli Nanda’s Japan diaries. And, it won’t be wrong to say that she is having a blast there. Now, Navya has found a hidden alley in Osaka. In the video, Navya is exploring the beautiful city. For the caption box, Navya wrote, “A hidden alley somewhere in Osaka.” One of the first comments came from her mother Shweta Bachchan Nanda. She wrote, “Hello cutie.” To this, Navya replied with a “hi”. Director Zoya Akhtar has left a red heart under the picture. For those who don’t know, Navya’s brother Agastya is going to make his Bollywood debut with Zoya’s The Archies.

Navya Naveli Nanda jetted off to Japan earlier this week. She announced her arrival with a picture of the city view. She used a chopsticks emoji in the caption.

Navya Naveli Nanda’s social media posts are often loaded with a punch of humour. But when it was time to give a shout out to her little brother Agastya Nanda, Navya penned a moving note on Instagram. She has shared a snapshot featuring Agastya’s character in the upcoming film The Archies. “Hey Junior, this is your moment. Don’t let anyone take it away from you. Love you. So much pride,” she wrote.

The Archies will also mark Suhana Khan and Khushi Kapoor’s Bollywood debut. The film will release in 2023. Agastya will play Archie Andrews in the Bollywood adaptation of The Archies comics. Suhana will be seen as Veronica and Khushi will step into Betty’s shoes. We would like to add that this is not the first time when the adventures of Archie Andrews and his group, including Veronica, Betty, Reggie and Jughead, have been adopted into a film or a series. Archie Andrews first appeared in the Pep Comics.