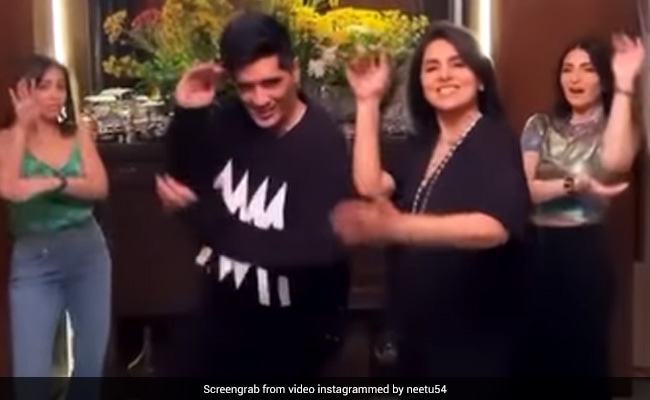 If you are looking for a Friday night done right moment, then Neetu Kapoor‘s Instagram page is your stop. Her party buddies: Manish Malhotra, Riddhima Kapoor Sahni and friends. So what are they up to? They are busy with The Punjaabban Song challenge. We must add that Neet Kapoor and team have nailed the hook step. Their special act is dedicated to one and only Karan Johar. We aren’t saying this. Neetu Kapoor has declared it in her caption. “Karan [Johar] this one is for you…Friday night live with our Punjaban.”

The Punjaabban Song, from the day of its release, has created a buzz on the Internet. Be it the hook step or the peppy beats, the peppy track has everyone grooving. And, now, we have some behind-the-scenes glimpses from The Punjaabban Song. “The hook step that has got the internet grooving – was a rage behind the scenes too! Watch all the fun that went down with this crazy parivaar,” she wrote. The clip features the lead cast of the Jug Jugg Jeeyo, including Varun Dhawan, Kiara Advani, Neetu Kapoor, and Anil Kapoor.

Alia Bhatt Is “Most Beautiful Inside Out”: Ranbir’s Mom Neetu Kapoor’s Birthday Wish

Alia Bhatt Is “Most Beautiful Inside Out”: Ranbir’s Mom Neetu Kapoor’s Birthday Wish