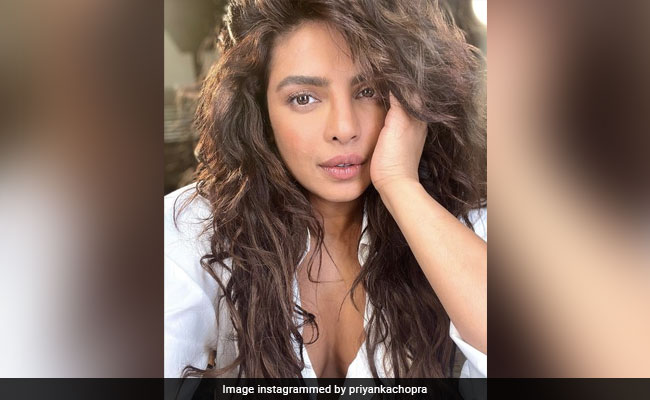 New Delhi: Global icon Priyanka Chopra is back on the sets of her upcoming web series Citadel after slaying in Paris. The actress has shared an update with a series of stunning pictures and a video on her Instagram handle, rocking in a white shirt. In the photos, Priyanka looks gorgeous in an unbuttoned shirt and no-makeup look. The actress has styled her hair in a beachy wave as she poses for the selfies. Soon after she shared the post, her husband, Nick Jonas, was among the first ones to drop a comment.

Sharing the post, Priyanka Chopra captioned it as “Snack #Citadel.” Soon after, Nick Jonas dropped, “(surprise emoticon) Wow”. Several of her friends also reacted to her post – makeup artist Sarah Tanno wrote, “Ok PC you better!!!!,” while chef Sami Udell called her a “beauty”. Check out the post below:

Priyanka Chopra has been keeping her Insta family updated by sharing several pictures and videos from the sets of Citadel. The actress will mark her digital debut with the upcoming web series created by Patrick Moran and the Russo brothers. The series will release on Amazon Prime Video. Apart from Priyanka, the web series also stars Richard Madden, Roland Moller and others.

Earlier, Priyanka Chopra shared a picture of her bruised face from the sets of Citadel. Sharing the post, the actress wrote, “Did u have a tough day at work as well? #actorslife #citadel #adayinthelife”. Check out the post below:

Meanwhile, Priyanka Chopra was lately in Paris for a jewellery brand endorsement with actress Anne Hathaway and BLACKPINK singer Lisa. Sharing the pictures with them,  Priyanka wrote, “And then there was us.. girls just wanna have fun!”. Check out the post below:

On the work front, Priyanka Chopra was recently seen in the movie The Matrix Resurrections. Next, she will be seen in Citadel, It’s All Coming Back To Me and a Bollywood film Jee Le Zaraa.