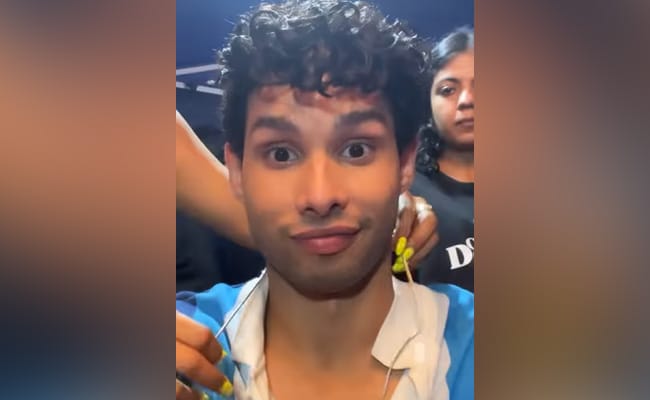 Bollywood actor Siddhant Chaturvedi has been the talk of the town ever since his debut in Gully Boy. Over the years, as the actor continues to impress with his work, Siddhant’s relationship status has gained considerable interest. On top of the list of names that have been linked to Siddhant is Navya Naveli Nanda, entrepreneur and granddaughter of Bollywood icon Amitabh Bachchan. And, while the two young celebrities have remained tight-lipped about their relationship status, they have done quite a bit of talking through their Instagram handles – at least that is what their fans think. A case in point is Siddhant’s latest post in which he is seen getting ready for a shoot. In the caption, he wrote, “Her noodle.”

Replying to the post, Ishaan Khatter asked the question on everyone’s mind and wrote, “Who dis mystery woman?”

Well, enthusiastic fans were quick to notice that the clue to decoding Siddhant Chaturvedi’s caption lies in Navya Nanda’s latest post. In it, Navya is seen standing in front of several lines of noodle packets, holding two in her hands. In the caption, she wrote, “Made some noodles today.” You really can’t miss the “noodle” connection, can you?

Fans even tagged Siddhant Chaturvedi under the post, while others rewrote Siddhant’s caption in Navya’s comments section.

Siddhant Chaturvedi and Navya Nanda have sparked relationship rumours previously too. The two made headlines recently when they arrived at director-producer Karan Johar’s birthday party at the same time. However, while Siddhant posed alone, Navya posed with their friend, actress Ananya Panday. Read all about it here.

On the work front, Siddhant Chaturvedi will be seen in a bunch of interesting projects such as Phone Bhoot with Katrina Kaif and Ishaan Khatter, Kho Gaye Hum Kahan with Ananya Panday and Adarsh Gourav and Yudhra among others.

Navya Naveli Nanda is a graduate of New York’s Fordham University and the co-founder of Aara Health as well as the founder of Project Naveli.

Siddhant Chaturvedi Took Akshay Kumar’s Viral “Bewafa Challenge.” So, How Did He Do?

Siddhant Chaturvedi Took Akshay Kumar’s Viral “Bewafa Challenge.” So, How Did He Do?