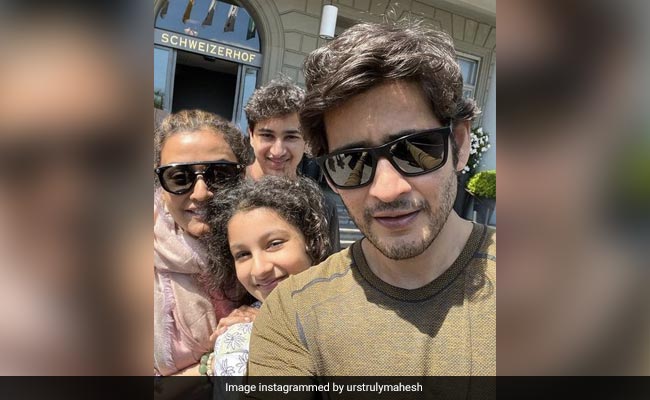 After the stupendous success of his film Sarkaru Vaari Paata, Mahesh Babu is taking a much-needed vacation with his family. The actor is travelling through Europe with his wife Namrata Shirodkar and children, Sitara Ghattamaneni and Gautham Ghattamaneni. After having visited Germany and Switzerland, the actor and family will now go on a road trip to Italy, he revealed in an Instagram post. The actor shared a selfie with his family after a lunch date and wrote, “Germany-Switzerland-Italy. Road trip it is. Next stop Italy. Lunch with the crazies.” He also added the hashtag, “vacay mode”.

Before this, Mahesh Babu had shared another selfie from Germany. The family visited the historic park and arboretum, Lichtentaler Allee. In the caption, the superstar said, “Summer strolls…around Lichtentaler Allee!”

Here’s another video of the Ghattamaneni family having a ball in Paris. Sharing a series of special moments, Mahesh Babu said, “Recharged and reset. Au revoir Paris!” Reacting to the post, producer Boney Kapoor said, “Happy family on vacation.”

Namrata Shirodkar has also shared several memories from their vacation. On Monday, Namrata shared two pictures with her daughter Sitara from Switzerland.  In the caption, she wrote, “Swiss misses! Leaving my heart behind in #Switzerland.”

When in Germany, Namrata Shirodkar was also seen spending some time with herself. Sharing a picture, she said, “Treating myself to some me time.”

Mahesh Babu and Namrata Shirodkar have been married since 2005. They have worked together in the 2000 film Vamsi.