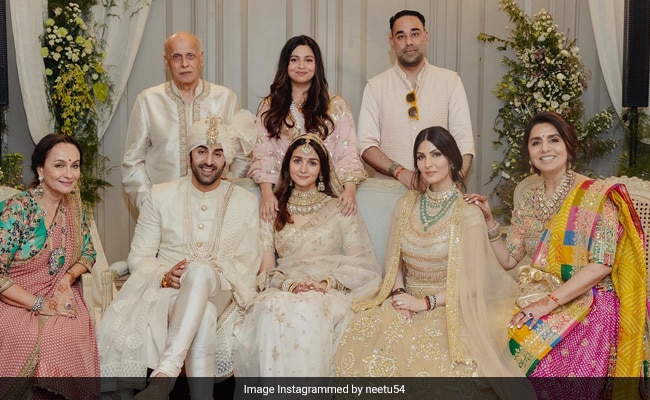 Alia and Ranbir with their family. (courtesy: neetu54)

The trailer of Brahmastra will release on June 15 (on Wednesday). However, ahead of the big day, the film’s lead actors Alia Bhatt and Ranbir Kapoor’s families gave them a huge shout out on social media. Ranbir Kapoor might be a social media recluse but his mom Neetu Kapoor is rather active on social media. Neetu Kapoor shared a video of son Ranbir, in which he could be seen talking about the film’s trailer launch and what the project means to him. Sharing the video, Neetu Kapoor wrote: “Shiva and Isha tomorrow.” In the comments section of Neetu Kapoor’s post, Alia’s mother Soni Razdan commented: “Hello my Spanish son… We can’t wait to see you both tomorrow too.” Ranbir’s sister Riddhima Kapoor Sahni dropped fire emojis in the comments, while Alia Bhatt dropped heart emojis.

This is what Neetu Kapoor posted:

The makers of the film have also been sharing posters from Brahmastra. Mouni Roy will be seen playing the role of Junoon in the film. Nagarjuna’s character was introduced as “artist Anish.” Amitabh Bachchan’s poster introduced him as the “Guru” of a desi lightsaber.

Have you met Shiva and Isha? The names of Ranbir Kapoor and Alia Bhatt’s characters in the film, respectively.

Brahmastra, Alia Bhatt and Ranbir Kapoor’s first project together, is slated to release in September and it includes a stellar cast that also includes Nagarjuna, Dimple Kapadia and Mouni Roy. The film is slated to release in theatres on September 9. Alia Bhatt and Ranbir Kapoor found love on the sets of the film. They got married in April this year.

When Alia Bhatt revealed how many kids she wanted, said she was thinking about ‘baby names’

When Alia Bhatt revealed how many kids she wanted, said she was thinking about ‘baby names’